The following is a translation that I have made from a chapter in Elias Petropoulos’ ‘Rebétika Songs: A Folkloric Study’, first published in 1968. This passage remains unchanged in all printings of the book, including the expanded second edition of 1979. I present this text here in absence of any other writing on this topic in English.

Although many of Petropoulos’ claims need to be further clarified and substantiated, he introduces some important ideas which have not been sufficiently explored by other writers on Rebétika, including:

Before reading it is essential for one to acquaint themselves with the following terms, which I have not directly translated in the text:

Rebétika = “A type of Greek song in oriental style, accompanied by oriental instruments and dances, and depicting the prodigal, low-life manners of rebétes” – Stathis Gauntlett.

Poústis, (pl. poústides) = literally “faggot” or “faggots”. The term is not always used in a direct or derogatory manner. It is very common for the term to be used casually and as a nickname. (noun)

Poústika = “in a gay manner” or “in a queer manner” (adverb)

Poutána = a derogatory term for a female sex worker (noun)

Out of all the forms of modern Greek folk song, rebétika are the most virtuous and morally pure. In no rebétiko song whatsoever is there a word making reference to themes of a sexual nature. Even the kisses are chaste and virtuous. The sexual details that do feature are not dirty – even those are expressed cleanly and beautifully. Almost nothing explicitly sexual can be found in rebétika songs, and that is a definitive finding. However, alongside rebétika circulate a number of obscene folk songs featuring heroic monks, priests and nuns. Some have newly composed melodies, some are parodies of well-known songs, and some have no melody at all. Here are five examples:

From up high where you sit
down below you will fall
you will be nailed by my dick
and you won’t be able to shit.

Remember where I fucked you
and it was a feast day
and from across sat
the 12 apostles.

The cunt of the priest’s wife
sleeps without a care
and its hairs are always growing longer
like the priest’s beard.

And the rural folk songs (dhimotiká) are even more outspoken than the rebétika. Here are some examples[3]:

Your little white breasts
Like Venus and the Pleiades
Your little breasts I remember
All these nights I try to sleep.

Your breasts are a paradise
And your body a lily.

I don’t want more than one chance
To put my hands
On your marbled breasts,
and after that let me die.

Out of all the flying creatures
The flea has flair
In the breasts of young maidens
He goes and strolls without a care.

As shown above, the rural folk song depicts female breasts with particular tenderness and as a key sexual symbol. From this Greek lyrical tradition comes the well-known lines of surrealist poet Andreas Embirikos: “the breasts teem with life/and the tits stand upright/the children suck on them/and suddenly the milk spills over.” These lines are connected with similar lyrics from dhimotiká songs, such as: “come out of the window, look at your carnations/and water them always with milk from your breasts.” In another dhimotiká ballad concerning the love of Kostantís for a princess named Liogénitis, the word “eunuch” is also mentioned. In the spoken word, modern Greeks use primarily female genders, even if they are insults aimed against men: koufála, poutána, poustára, gamióla. In practice, it shows how the rebétes know much more than what is suggested from their songs about erotic conducts and pleasures.

The Greek people despise effeminates, and call them poústides (Turkish word), or binédes (from the Turkish verb binemék = to mount/to straddle). Dhimotiká songs only refer to effeminates incidentally, e.g. “go beat him, the cuckold, go beat him, the poústi”. Homosexuality is something well known amongst the rebétes. In prisons, they distinguish the “effeminates” from the “chickens”[4], who do not otherwise engage in homosexual activity, but who sell themselves for cash to prisoners who share the same cell. The Greek Independence war hero Yannis Makriyannis writes in prison about “Braïmis the drunk” who “drinks bottles of rum and wine” and is a “debauchee who has his way with women and children.” In the 19th century, songs from the cities were dubbed “poústika”. However, rebétika songs in particular show total ignorance of effeminates. Despite this, there exists the well-known expression: “whoever sways like a striking bell, is a faggot or a whore” as well as the couplet “stand up my soldier lad/grab the dick from the hairs” which is recited together by soldiers during the morning wake-up call. Sometimes, rebétika songs speak of prostitutes, but they are usually mentioned in such a discreet and imperceptible way that nobody can detect the true meaning. This kind of discreet language is necessary as people can get very offended when confronted with things of a sexual nature or conduct.

[2] Samiótissa = lady from Samos, an island in the Eastern Aegean in Greece.

[3] Only a selection of the verses have been translated. 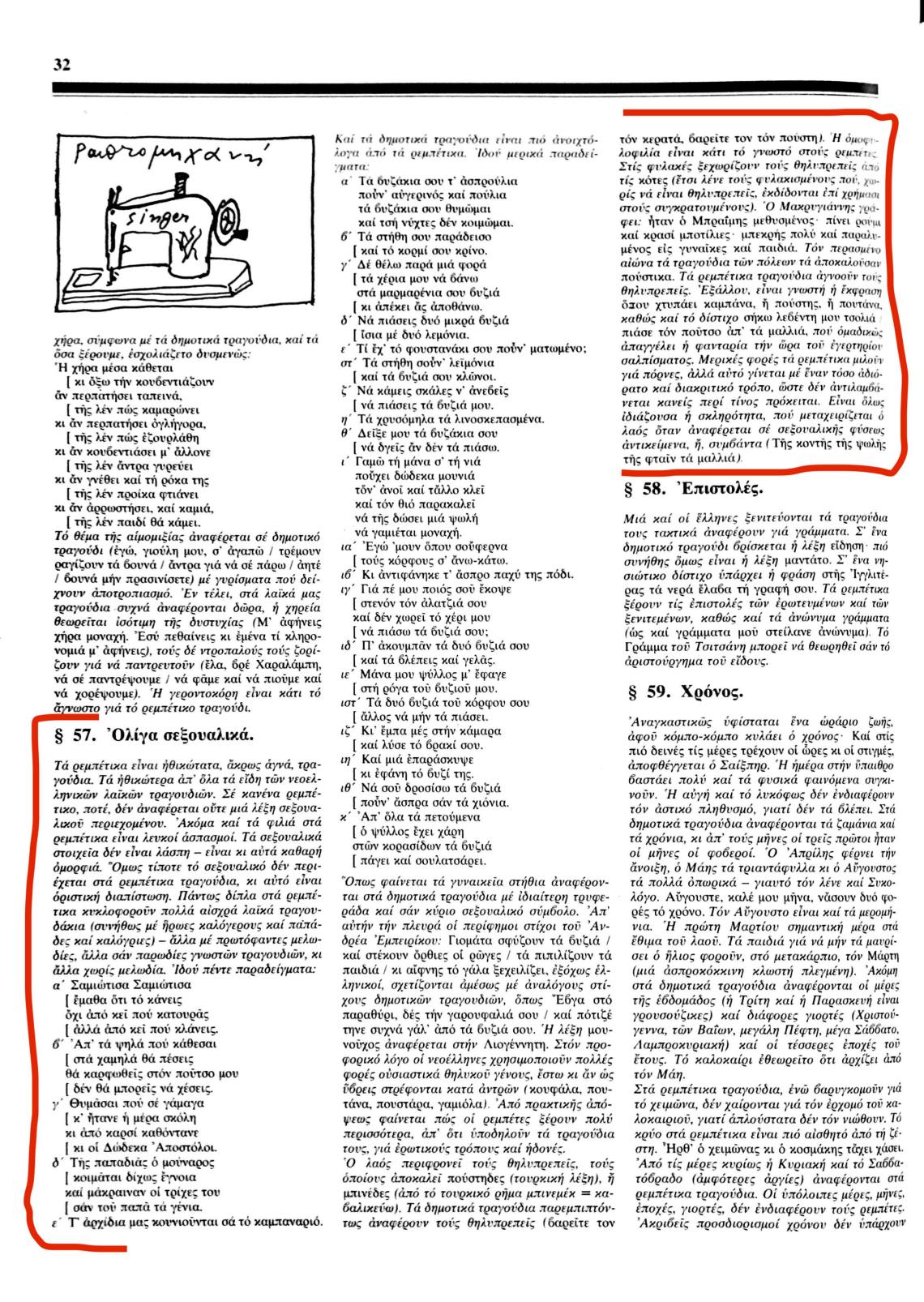 Published with permission from Mary Koukoules.